My friend Tom has been sharing baritone ukulele tablature with all of our bari-uke playing friends on the Humble Baritonics blog. Tom arrangements, I call "Tom Nelson's Tunes" are all created with a tool called tabledit. I like using tabledit since it allows one to slow down the arrangements to study songs at slower speeds.

Tom recently sent me photos of his music room, where he plays and creates. I am thrilled to have Tom share such a wide variety of arrangements with the baritone ukulele community. He has the advantage of the cold Michigan winters keeping him in the warmth of the music room. Here we see him in creation mode... 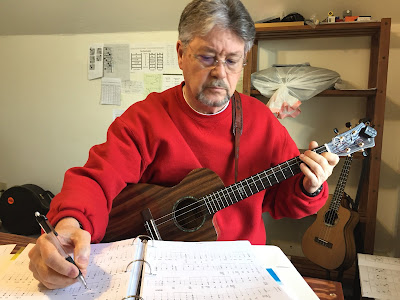 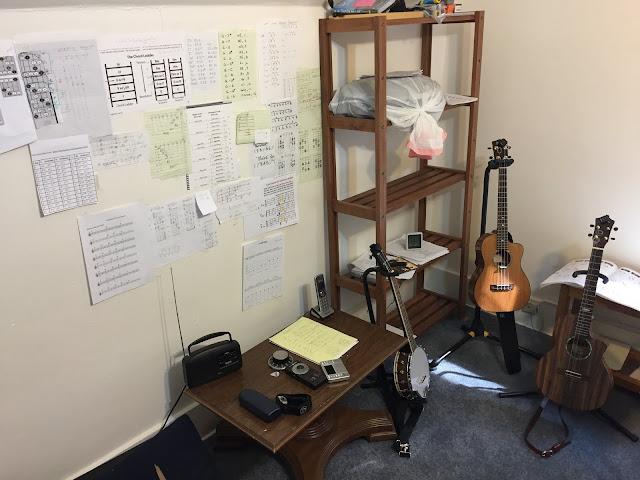 I have been a fan of Abigail's Jazz Standards and posted some of her videos on The Bad-Ass Baritone Ukulele blog in a playlist, here. She's compiled a playlist of her tutorials for us all  here. She spends quite a bit of time in her earlier videos going over the chords in some detail. Then she moves into the movement between the jazz chords.

In her video, "It Could Happen to You," She gives a wonderful video of her playing and singing. The videos will give you a great feel of the chord movements. She also has a great pulse to her music with instructions in bit sized chunks. 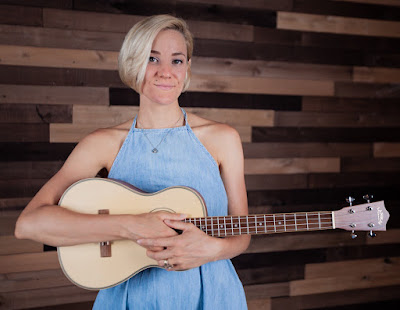 Abi with her Lanikai Bari Uke

Abi regularly adds to her tutorials, so if this music is your cup of tea, please check back for more... Her Patreon address is https://www.patreon.com/abigailflowersmusic

I think that the Bajan Pied Piper has a lot to offer. I am glad his videos are still up as I haven't seen anything new for quite a while. He has quite a following. His style is psychological, philosophical and low tech. His work is a true labor of love which he shares both on the baritone ukulele and pan pipes. He lives in Barbados and told me a story of kayaking around the island and getting pummeled under the waves.

The words below are of his creation. Loads and loads of information is provided. I find that the think that I found most useful was his suggestion that one learns to play "SWEET NOTHINGS."


Learn how to improvise music. MUSIC LESSON 115. The pentatonic scale is a musical scale with five pitches per octave. Of late, many jazz, rock and blues musicians have discovered it and you can hear it in the lead guitar licks of many famous rock songs, as well as in folk songs and jazz tunes. Although I have used a fret board to demonstrate and illustrate and given a lot of tips re guitar playing (the box, etc.) the information is universal and applicable to all instruments. Regardless of what instrument you play ... it's the music you're playing... go to the backing track address below, choose a track you like ... and express yourself!

Now here are 5 Pentatonic Scales in the key of G I'll give you several others in the following *lesson* (part two) which I'll post after I think you've *mastered* what's here.

If you're playing guitar, when using Pentatonic scales, maybe I should also say when improvising generally, as a basic rule (and remember rules are made to be broken! :) strive to work mostly on the first three strings. If you can, try to formulate the scale you're working with in a box pattern if possible ~ this brings the notes in close proximity and makes fingering simple and quick. Playing in the box is a B. B. King staple. Depending on the key you wish to play in, locate the tonic note on a fret of one of the first three strings and see if the rest of the scale will fall into place, in a box - admirably 3 stings wide x 4 frets deep.

IMPROVISING TECHNIQUES FOR ALL INSTRUMENTS AND ALL SCALES (I think you are going to like working with the Pentatonics!) ~ 1/ Invert scales i.e. change around the sequence of the notes, it gives them an entirely different sound.

Try this experiment: play G A B D E G Now play E G A B D E and you'll hear it has a different nuance yet it's the same sequence of notes. By starting your improv on a note other than the root note of the scale, your improvisation will take on a different color.

2/ When using the chordal approach to improvising you can break the chord and play only some of the notes, or repeat them, or play them out of sequence, or chromaticize them.
3/ End your phrase on a chord tone (strongest) or on a scale tone and your improv will sound right.
4/ Yes! Use chromaticism! It's an important tool! What this means is ... insert semi-tones in some of your phrases. Example ~ instead of playing C D E G you can try C C# D D# E G and so on.
5/ Repetition, chromaticism, syncopation (rhythm changes) and silence! Four winners! "The pause is as important as the note." ~Truman Fisher
6/ If you will listen to good musicians you'll frequently hear after the soloist plays a phrase, he often repeats it, or a variation of it. Often the phrase, or a variation of it, is played three times before moving on to something else i.e. C D D# E, C D D# E, C D D# E - G A C etc.
7/ Related to this idea of repetition is the concept of call and response which you learned about earlier in my harmonica *lessons.* Rather than repeat the original phrase, you can consider the phrase as a question or call, and follow it up with an answer or response. This is the musical equivalent of asking, "will I see you again?" and then responding "yes, again, in the morning." i.e. G A C A A A - C E C E G Bb C etc. etc.

YOUR ASSIGNMENT ~ practice this until we meet again ~ take the scales given above and fool around with them. Get familiar with where the notes are on your instrument and be able to play them accurately. Play around with them and improvise some phrases. Remember to use ~ repetition, silence, syncopation, chromaticism, etc Use this backing track ~ http://www.youtube.com/watch?v=A7nTvL... When you have developed some proficiency, use the G Pentatonic scale over the G chords, the C Pentatonic over the C chords and the D Pentatonic over the D chords. (By now you should know the chords in the standard 12-bar progression ~ they are G (I chord) C (IV chord) and D (V chord.)

Please read the pentatonic information given here ~ http://www.youtube.com/my_videos_edit... - there was not enough space to put them on this page.
at February 08, 2019 No comments:

The lessons shown here are completely applicable to the baritone ukulele. The hand movements here are insightful in a way that is uncommon.

The baritone ukulele player has another great place to find instructional materials in ukeeducation.org. There are beginner skills development items as well as chord melody and blues arrangements. Dig in and enjoy this great resource developed by Spencer Gay.

Glen Rose is a friend of mine. I met him through the the Ukulele Club of Santa Cruz community. He has quite a following in the ukulele community and has created Jazzy Ukulele books for the baritone ukulele player. There's been one big problem and that is he plays the baritone ukulele with a set of GCEA strings. I was thinking how can I get Glen Rose to work on the Bari-Uke Tech site?

So a day or two after typing Glen's name on the title bar I receive and e-mail from him. The funny thing is that he's had a problem too. He'd kinda locked himself info the GCEA mode with his followers and he asked me if he could do DGBE-tuned bari videos to share exclusively on my bari uke sites. He knew nothing about this new blog or my concerns - but somehow we found a synchronicity.

http://www.ukulelemag.com/stories/baritone-ukulele-basics
at February 03, 2019 No comments:

Aaron Crowell (Lick of the Day for Baritone Ukulele)

Lick of the Day

I have followed Dr Bekken for several years on my first baritone ukulele site: Humble Baritonics. The Doc is from Norway and is an accomplished Jazz Pianist. He also has is well known for his jazz work on the baritone ukulele. He has found many musical treasures and adds his special talents. A couple of years back I asked him if he would share some videos of how he works his magic.